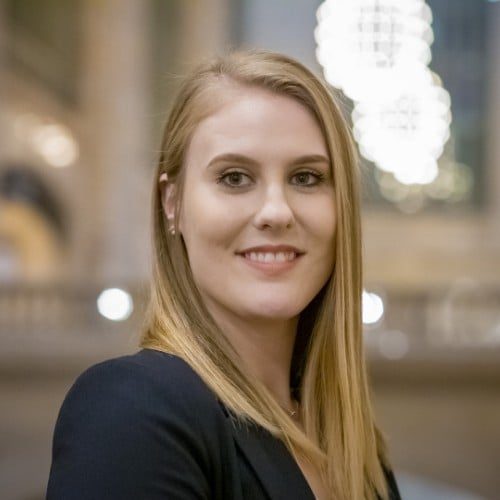 What is it that attracts people to the tech industry? Is it the ability to surround yourself with some of the most intelligent people you’ve ever met and challenge yourself by not being the smartest person in the room? Is it the desire to make an impact and not feel like a cog in the wheel of corporate America? It depends on who you are and perhaps it's some combination of all of these things - at least I know that was the case for me.

Although I wasn’t always drawn to pursuing a career in the tech industry, I did  know that I was interested in working with data and all sorts of information as it applies to human beings and our behaviors. Shortly after college, I started my career in the insurance industry and took an underwriting opportunity at a large insurance carrier. I found that I thrived on the client-facing side of business and I was drawn to the almost “investigative” nature of underwriting. I was especially intrigued by cyber liability. I spent about three and-a-half years as an underwriter, and while I greatly enjoyed my time there and excelled in the role, I couldn’t help but feel like my career was not completely fulfilled. I couldn’t  put my finger on what was missing, but I was definitely about to find out. In January, I took a role at CyberCube Analytics, as a Client Product Advisor and rang in the New Year.

At first, as you might expect, it was definitely a bit intimidating going from a big insurance company with many years of history and proven stability under their belts to a smaller, early phase insurtech company with a very different culture. However, the more I learned about CyberCube, the more I became comfortable with my decision. I’ve found that while there are definitely some stark differences between the traditional insurance industry and the insurtech side of things, there are also a lot of similarities. Looking back, I think that it ultimately boils down to the combination of these similarities and differences that makes me confident and content with my decision.

The differences were apparent once I joined CyberCube. For starters, I expected my new company to feel much smaller than it actually does. As CyberCube consists of many talented people and has offices all over the world from California to Estonia, sometimes I forget that we are still a smaller company than where I came from previously. Despite the fact that I do feel as though I work for a much larger company, there is still very much a close-knit and transparent culture that you wouldn’t find at a larger organization. I think that this aspect and the culture at CyberCube as a whole is probably the biggest difference. I’ve always heard the term “open-door policy” being tossed around with so many companies claiming to be this way, but I never truly understood the meaning until coming to CyberCube. We really do bring this policy to life from our weekly all-hands company meetings to our monthly social events; everyone is involved and everyone is very much a part of the same team. I feel like I truly have access to everyone else’s knowledge and that everyone is a resource to each other - regardless of seniority.

The more I begin to immerse myself in my role, the more I realize that this is also an excellent opportunity to further challenge myself in my professional development and education, which wasn’t something I was able to do as an underwriter. Since I’m close to our product methodology and data analytics, I am now able to use my economics background and apply my degree in a more meaningful and direct way. As I mentioned, I’ve always had a passion for data and how it applies to human behaviors so this is something I value greatly. I am constantly finding myself interpreting data and our models and learning new ways to analyse information.

While teamwork did come into play as an underwriter, such as bouncing ideas off other underwriters to collaborate or working with the claims team, I didn’t find that these types of interactions were on a daily basis. In my current role, I have found that there is much more of a cross-functional aspect which enables me to work with different teams, taking on new projects and trying my hand in many different areas of the company. From this, I’m able to figure out what I enjoy and what I dislike on a broader level rather than just  my specific role. That being said, ironically I also feel a greater sense of individuality and independence at CyberCube. As I work with different functions, I’m able to really be a self-starter and pursue the projects or tasks that I find interesting rather than simply being assigned tasks. This means that I am able to constantly be a part of new projects and every day is different for me, whereas previously I could mostly predict how my day would go.

It was pretty easy to figure out the differences, but then I started to wonder: are there any similarities between what I am doing now versus before? Honestly, I’ve realized that there’s actually quite a bit of overlap. I’ve found that my past underwriting skills in particular translate very well to my current role. For one, I can use the skills I gained from working with brokers to navigate my current client relationships. Not only that, but I am also using my understanding of underwriting, insurance and cyber risk in general as well as my knowledge of the broker and underwriter relationship, in a way that enables me to empathize with our clients and truly understand their perspectives and struggles. Finally, I’ve also found that underwriting has equipped me with the tools to be able to approach difficult questions and solve tricky situations, to investigate things I may not have the answer to.

All in all, behind all the trendiness that comes with working at a tech (or insurtech) company like CyberCube, I’ve also gained some invaluable experience and knowledge since joining the company. Even in my short time here, I’ve learned so much more about data science and cybersecurity. I’ve been challenging myself intellectually by learning the ins and outs of our products and offerings - from the methodology that goes into them to what the user interface looks like and why - and not to mention picking up all the fancy tech lingo along the way! Essentially, I feel like the aspects of my underwriting role that I enjoyed the most still remain in my role at CyberCube, and that I’ve now fulfilled aspects I felt were missing in my prior role.

So, to anyone who may be considering a move of this magnitude: I think it’s a very personal choice. For me, the decision has been the best I’ve made for my career because the role and the company fit well with my values, goals, personality, and lifestyle. I enjoy being a self-starter, working closely with cross-functional teams and pursuing a new task to switch up my daily routine. However, not everyone is the same. You may find that you value predictability or consistency in your day-to-day duties, or that you would rather not find tasks on your own. You might want to focus on tasks pertaining to just your specific role rather than working more cross-functionally. It truly depends on your preferences and the things you value in a career. However,  if your values align with mine, I say go for it - it might be intimidating at first but once you’ve taken the plunge, the water’s fine.

We are pleased to announce that CyberCube has successfully raised additional capital from all four of its existing institutional investors to support the company as we expand our industry-leading...